Bibop was a little dragon with orange scales. He had been living on Grey Mountain with his mother since he'd been born. That was already nearly a hundred years ago. A hundred years old, that's when the age of understanding begins for dragons. Bibop was finally going to learn how to breathe fire. He could not wait for this moment to arrive.

At last his birthday came. Bibop woke up excited and went singing into the kitchen. His mother jumped and hid something behind her back.

— Bibop! I didn't hear you! Happy birthday, darling!
She put a cloth over what she had been holding and came over to him and gave him a kiss on his forehead.
— What do you fancy eating?
He wanted grilled lamb. She smiled. That was his favorite snack. While she was busy cooking, Bibop snuck behind her and went to lift the cloth. He was sure that he was going to find the guide to breathing fire. He was disappointed to find a book on flying.

— Bibop. That's for tonight! cried his mother.
— But that's not what I wanted! cried back the little dragon.

His mother's expression changed. She frowned, and then she sighed and sat down. She asked Bibop to do the same thing, but he was too worked up to do as she said.

— You wanted so much to breathe fire that I've never known how to tell you that your father was a giant lizard.
— What does that mean?
— It means that you'll never be able to breathe fire.

Never... be able... to breathe... fire. Bibop's heart stopped beating and then started pounding hard. He could not believe what he was hearing. It was impossible. This was what he'd always dreamed of.

— It doesn't mean you won't be a proper dragon. You're the best flyer now, said his mother. But you have to accept that you won't be able to breathe fire. I'm really sorry, Bibop.
— It's not fair! shouted the little dragon, putting his head between his paws.

He had never felt so terrible. He grabbed his backpack and went out, slamming the door. Already he could hear how the kids at school would make fun of him when they found out he was never going to breathe fire. At the end of the road, his school was on the right and the way out of the village was on the left. He preferred to leave the village behind. When he got to the edge of the village he unfurled his wings and took off. He'd never flown so far away from home on his own before. He felt a wave of pride and freedom as he flew on and went higher and higher. The village was now just a dot on Grey Mountain and soon even Grey Mountain disappeared. At the same time Red Mountain appeared on the horizon – it's called that because of the boiling red lava that bursts out whenever the mountain becomes angry. At this point Bibop had a crazy idea. If his mother didn't want to teach him to breathe fire, then the Red Mountain would have to do it. He swerved off in that direction.

Bibop had been flying for several hours. Red Mountain was getting bigger. It was rumbling loudly. All the other animals were running in the opposite direction, but Bibop kept getting closer and closer until he could touch it. The little dragon wanted to get right up to the top, so he flew up to the crater where smoke was billowing out. Deep inside the mountain, lava was beginning to boil and spill over. But Bibop wanted to get even closer. He wanted to understand what was going on so that he could do it too. How on earth could he make fire in his throat? Bibop dropped down inside the crater. He was hovering below the surface when the lava began to bubble and flow.

— Mountain? he shouted. Mountain! Tell me how you do it? My...
He couldn't finish his sentence. A violent explosion sent a rock flying from the side that hit him and wounded his left wing. He lost his balance, cried out and only just managed to grip on to the crater's edge. Pain swept through his wing – it must have been broken. Now it was impossible for him to fly. He started to panic as he felt the lava rising and getting nearer and nearer to his trembling legs.

Suddenly, cool air brushed his shoulders. He lifted his eyes and saw his mother.

— Don't move! I'm getting you out of here! she shouted.

She positioned her powerful claws around his body and unhooked him from the wall. Then she rose swiftly into the air with him, up and out of the crater. Several dragons from the village were out there, flying around Red Mountain. They had come with his mother to help her find him. After seeing that she was safely carrying her son, all the dragons set off on their journey home together.

The group was only a few hundred yards from Red Mountain when the volcano exploded. Lava poured out in all directions. Burning rocks flew into the air. The dragons aimed their flames at the missiles to break them up before they could reach them. They were safe.

Three hours later they touched down back home. The dragons all turned to Bibop.
— Luckily the birds told us which way you'd gone. We nearly arrived too late!
— Why on earth did you go down into the crater?
— I wanted to learn how to breathe fire like the mountain, said Bibop, dusting himself off.
The dragons stared at him, eyes wide.
— Your son is extremely foolish, said one of the dragons to Bibop's mother.
— He put you both in great danger, added another dragon.
Bibop was on the edge of tears. He felt guilty about putting his mother's life in danger.

— Please stop! said Bibop's mother. Can't you see that he's feeling bad enough about this? Personally, what I'm seeing is a little dragon who showed great determination and courage.
The dragons all stopped talking and she came up to her son.
— I'm so sorry that I never told you about your dad. If you'd known the truth you would never have tried to do something like that. I won't ever lie to you again.
Bibop smiled and hugged his mother hard with his good wing. Then his stomach gurgled loudly, and she laughed.
— Come on, let's go home. Your grilled lamb is still waiting for you! 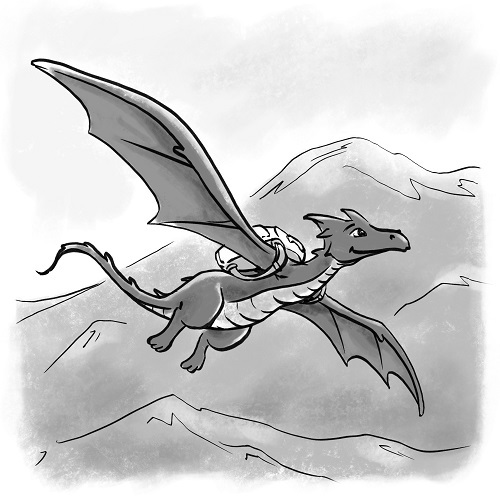 Please highlight text with your mouse in order to use the audio transcription.

Oops, the selected text contains characters, it's too long!
Please select less than 500 characters in order to use the audio transcript.